The University of Potsdam, in coordination of the Theodor Fontane Archive is organized an international congress as the culmination of the academic programme of the Fontane Year (fontane.200). Literary and media scientists from Germany, Austria, Switzerland, England, Sweden, Russia and the United States came together on the Campus Am Neuen Palais of the University of Potsdam in June of 2019 for more than fifty lectures and presentations. Ceremonial addresses, evening functions, and a cultural social programme in summery Potsdam flanked the academic event.

Theodor Fontane worked with different types of media in a thoroughly modern way: During his multi-year stay as a press agent in London he acquainted himself with the most innovative press landscape of his time; as an editor in Berlin, he performed journalistic drudgery; he wrote reviews of theater productions, the visual arts and literature. In all of this, he knew exactly how to format his texts for a target audience und how to locate his themes, a »project existence […] which tried to monetize artistic and linguistic capabilities in a rapidly changing media landscape« (Iwan-Michelangelo D’Aprile).

The Congress was supported by the Ministerium für Wissenschaft, Forschung und Kultur des Landes Brandenburg as well as the University of Potsdam in the framework of the Fontane Year (fontane.200).

His numerous correspondences, in which he captivatingly found the tone and stylistic sleight of hand with which he could win over his counterpart, attest that Fontane was also one of the most productive and creative letter writers of the 19th century. His novels and »Ramblings« are also decidedly products of media: composed initially for magazines and newspapers in which the texts often appeared serially, they were released only subsequently as books by various publishers. What follows from Fontane’s equally comprehensive and productive embeddedness in the medial environment of his times? What publishing strategies can be delineated? Which interactions between journalists and novelist can be detected? Which traces did the media system of the 19th century, shaped by new media such as photography and telegraphy, leave in his works? What poetic energy do the different types of media unfold in Fontane’s literary writings, in his letters, in his war reports, in his ballads or in his (travel) feuilletons?

Regarded today as ›classic‹, the novelist, travel und landscape writer should in no way be dismissed in the question of »Fontane’s Media«. More importantly is to bring attention to the fact that in these roles—as well as in their respective texts—, Fontane reports, narrates and versifies in the ecological media situation of the 19th century. The equally swift and comprehensive medialization and networking of society in the course of the 19th century are to be grasped as productive prerequisites of Fontane’s authorial occupations. He was imbedded in a highly branched net of correspondence and postal text circulation and acquainted with the routines and audiences of the popular periodical press, for which he wrote his entire life. He was also shaped in manifold ways by the visual culture of his time, and for all these reasons, Fontane has come to be recognized equally as a journalistically versed and aesthetically sensitive crossover artist.

Thereby, the congress also discussed which roles media play in the reception and trajectory of the cultural representation of Fontane and his time. In this context, one must not only consider that »most forms and institutions of such representations […] are themselves inventions of the 19th century« (Jürgen Osterhammel): from the author archive and the scientific edition, to literary societies right up to photography and film. The question is also how cultural and scientific memory assert themselves in the procession of digital media transformations. How does a culture assure its ›classical‹ heritage in the surroundings of permanent update and fragmentation? In which medias do we encounter Fontane’s texts?

A look at the scientific programme

Over 50 lectures in more than 20 sections built the congresses main academic programme. It was opened on Thursday afternoon, the 13th of June 2019, with a ceremonial event. The literary and media scientist Rolf Parr  held the opening lecture with the title: »Theodor Fontane: Kommunizieren, Produzieren und Publizieren in vernetzten Medien.«

A look at the social programme

A comprehensive social programme accompanied the congress. There were, among other things, two prominently cast evening events.

»Ein sehr guter Stoff«. Fontane biographies
A panel conversation at the Potsdamer Stadt- und Landesbibliothek with the Fontane biographers Iwan-Michelangelo D’Aprile, Regina Dieterle and Hans Dieter Zimmermann inquired about the strategies and ways of approaching Fontane biographically—and discussed the biography as a popular medium of reception of the ›classics‹.

»Besser als feuilletonistisches Gequassel«. About the media praxis of taking notes
A reading and conversation with the writer Kathrin Röggla and the Georg-Büchner-Preis winner Marcel Breyer centered on the handwork of note taking: how do writers and journalists actually take notes today? How do they handle notes, and what is made of them? And can one actually read notes aloud?

Numerous further events and presentations accompanied the congress: a poster exhibition, a contentious BarCamp for the students of the Faculty of Arts at the University of Potsdam, which debated Fontane from an interdisciplinary perspective, workshops for teachers and a forum ›young Fontane-Research‹, in which junior scientist reported on their research plans. It was possible to visit the Fontane Exhibition »fontane.200/Brandenburg—Bilder und Geschichten« in the Haus der Brandenburgisch-Preußischen Geschichte in Potsdam or the main exhibition »fontane.200/Autor« in the Neuruppin Museum.

Chair of the Programme Comittee 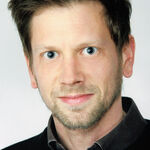